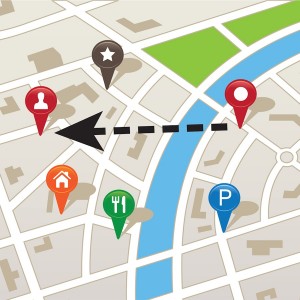 Product reviews are not generally the fodder for time management newsletters. However, recent events accorded me an opportunity to test three popular map apps for my smartphone. The test focused on which app saved me the most time while trying to get to a new location in an unfamiliar city. (As a technical note, this test was conducted on an iPhone 5.)

1. Maps – Apple – Free. Apple introduced its map app in the iOS 6 release. Although the app included some interesting new features, like titling and the ability to “flyover” areas, it experienced some core mapping failures that many feel was the first crack in Apple’s post-Jobs armor.

2. Google Maps – Google – Free. Google’s map app is the mainstay for most mobile device users. Shortly after being relieved of its duties in the Apple pre-installed software lineup, Google released its latest version for iOS. The clean interface and feature-rich functionality immediately made it a top download for iDevice users everywhere.

3. MapQuest – MapQuest – Free. MapQuest long ago released its mobile app, which is a companion to its popular mapping web site. Of the three apps tested, MapQuest is largely focused on those seeking directions. The User Interface is the least attractive, but once the basic functionality is learned, it’s easy to use.