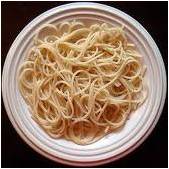 One of the greatest benefits to using e-mail is the ability to converse with a group of people asynchronously over a large geographic area.  Just add any number of e-mail addresses into the To:, CC: and BCC: fields, write your e-mail and hit Send.  Off goes your message to be read and responded to by everyone everywhere at any time. And that’s when the trouble begins.

Spaghetti on a Plate

Unlike real-time environments such as conference calls or meetings where the directionality of a statement can be implied by the circumstances – “She’s asking me that question because she’s looking at me.” or “That’s a question for the entire group.” – e-mail messages rarely queue the directionality of comments or questions.  Consequently, any and/or many of the people on the thread begin weighing in … via “Reply All” of course.  Now, instead of a communication that was intended to keep a group informed while also directing certain comments to some and seeking specific answers from others, you have spaghetti on a plate.  A whole bunch of unorganized information is being delivered to a large group of people with no one directing traffic.  Think Tokyo train platforms at rush hour.