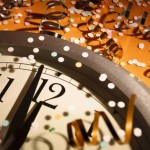 With our holiday travel over, I find myself working on 2011 projects – finalizing my second book, revising my first book into its third edition, and working on my 2011 business plan.  Today, though, I’m not feeling the rush to get to the future.  Rather, I’m feeling the tug of the past, specifically the last year.

One of the best things about the week between Christmas and New Years is the retrospective programs that are aired on TV and published by print and web content publishers.  There’s something visceral and substantive about reviewing what has happened in the last twelve months.  Our day-to-day lives tend to be all-consuming, causing us to focus on the right-now and the immediate future.  Retrospectives give us an opportunity to pause and consider what has been and how and why it mattered.

A personal favorite of mine is the review of those who have passed away since the ball last dropped.  Remembering those people and all that they accomplished during their lives forces me to look at time in the broadest and most relevant of senses – the lifetime.  Somehow that perspective is settling and reassuring to me.

With that introduction, then, let me say that for me and mine, 2010 was a year of some pretty dramatic changes and a number of pretty amazing events.  Here are some that come to mind.

To the Cloud and Beyond!

For those who aren’t sure what “the cloud” means, I’ll try to shed some light on this phrase and how it – the cloud – is actually used..  The cloud refers to computers (usually lots of them, called “servers”) that reside in distant places and that exist for the purpose of storing your stuff – anything and everything electronic – on them.  Essentially, they replace the hard drive on your computer.  All you need to access your stuff that is stored on these far-away computers (“in/on the cloud”) is an Internet connection and a web browser, e.g., Internet Explorer or Firefox or their siblings.

The benefits of cloud computing are many, but the greatest benefit is ready access to your information virtually anywhere in the world from any device that is or can be connected to the internet, including a computer, a tablet (think iPad), or a smartphone.

In the last year, both our kayaking business (Outdoorplay) and my consulting business (QuietSpacing®) moved to the cloud, to wit:

Starting in mid-2009, we (the Outdoorplay team) began migrating the systems we use to run our business from a variety of software programs – the custom-built web site, Mail Order Manager (order and customer management), Cooler E-mail (newsletters), and QuickBooks (financial package) – to a single Software as a Service (SaaS) platform called NetSuite.  Though the migration was painful, very painful, we now run Outdoorplay from a single cloud-based provider.  That means that whether we’re offering product for sale on the web site, sending a newsletter containing coupons for buying products on our web site, processing an order in our warehouse that was received through the web site, ordering product from our vendors to store in our warehouse and sell via our web site, paying for the product we ordered from our vendors, paying our fine team of people for making all the above happen, or reviewing our company’s performance by looking at a P&L or Balance Sheet, it’s all done in one place – NetSuite.  And NetSuite is accessed through a browser.  And browsers are used to view the Internet.  So, to run Outdoorplay, all we do is sit down at any device connected to Internet, navigate to the NetSuite web site, login, and everything we need is there!  (And the cost is about 1/2 an FTE per year.) 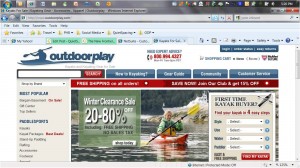 After the NetSuite platform launched in February of 2010 and we cleared the bugs out of the system, we began asking what else we could migrate to this same sort of cloud-based model.  The answer was our “productivity suite” – e-mail, calendering, task management and document production/management.  Like most companies we had historically used Microsoft Office to perform all these functions, but we were advised by several good friends to take a look at Google Apps.  We did take a look and we liked it so much we switched over in August of 2010.  Now, all that functionality is also delivered to us via the browser with everything stored on Google’s cloud!  (And the cost is less than upgrading one license for Microsoft Office per year.)

Sounds cool, you’re saying, but why go through it all? What’s the real value?  I’ll give you two quick examples of how beneficial these changes were:

Outdoorplay is the more mature of my two businesses, plus it has a full-time staff.  Getting everything running on NetSuite and Google Apps made us far more efficient.  This caused me to start looking at the QuietSpacing® side of the house to see what could be accomplished there as well.

QuietSpacing® Dabbles in The Cloud

There are several instances where I dabbled in cloud computing for QuietSpacing® in 2010.  The most significant migration was to an online CRM (Customer Relationship Management) system.  I eventually chose to go with Zoho CRM after trying on a number of other vendors.  The primary reasons for choosing Zoho CRM were (a) it’s free for up to three users and (b) it’s fully customizable to include fields that are specific to my needs.

Over the next twelve months, I anticipate moving more and more of my consulting practice to the cloud. The single biggest obstacle right now is the availability of a laptop and a reliable Internet connection when I’m speaking to large audiences on the road.  You’d think meeting facilities would have that dialed, but that’s not always the case.  The real solution is to remove the slideware from my general session presentations, but that isn’t an option during my training programs.  Stay tuned on this one!

From Living in Multiple Locations to Living on the Move

One of the big shifts that occurred over the last several years became permanent this year – our desire, and that of many of our friends, to be more mobile in how and where we live. And some of our friends went to the extreme.

About five years ago, we began our search for new “winter hunting grounds.”  Between the gray, dark cold of Northwest Montana and the gray, rainy cold of Northwest Oregon, we were done with “real” winter.  We trekked our way through Tucson, AZ, Reno, NV, and Bend, OR, before alighting in Las Vegas.  Who’da thunk?  But here we are, happily ensconced on the western edge of one of the greatest party towns in the entire world. 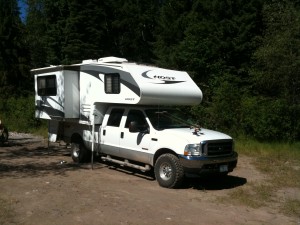 Not to be outdone, three of our friends have gone beyond having more than one place to live.  They’ve taken to the road and the water in a big way.  My business partner (in Outdoorplay) and his finance are traveling the Americas in their customized Sprinter van.  Checkout www.sprinterlife.com to learn more about that adventure.

And my two best friends have both taken to ultra-mobility.  One has been living in his Ford F350 Crew Crewcab pickup with its double-slide out camper, along with his cat and dog, for the last 18 months or so.  We geo-locked friends stay abreast of his doings via Facebook updates and intermittent texts and e-mail missives.

And in the vein of Yvon Chouinard’s great 180 Degrees South adventure, the other has taken to the high seas in his 35′ blue-water sailboat.  Tracking him down is a matter of determining if he’s in the Sea of Cortez, along the coast of California, or relaxing in some seaport in between.

I am left feeling a bit behind the curve when compared to those folks!

A Renewed Perspective and Respect for Austerity

It appears from the data points I’ve collected that the Great Recession is on the wane.  The US and global economies are not healthy by any means, nor will we return to the roaring ’00s any time soon.  However, both Outdoorplay and QuietSpacing® are experiencing positive signs of growth.  It is so much more pleasant to start the year out with the sun coming up rather than in the dark of night, which is what I remember about December 2009.  Will it continue to improve?  I think so.  Have we learned our lesson about rampant consumption and living only for today?  I hope so.

Peaking Around the Corner

As we bid farewell to this last year of experiences, I am mindful of the lessons learned, the travails suffered, and the successes enjoyed.  Looking into 2011, it is with optimism and a re-commitment to the team at Outdoorplay and to my QuietSpacing® clients that I march forward.